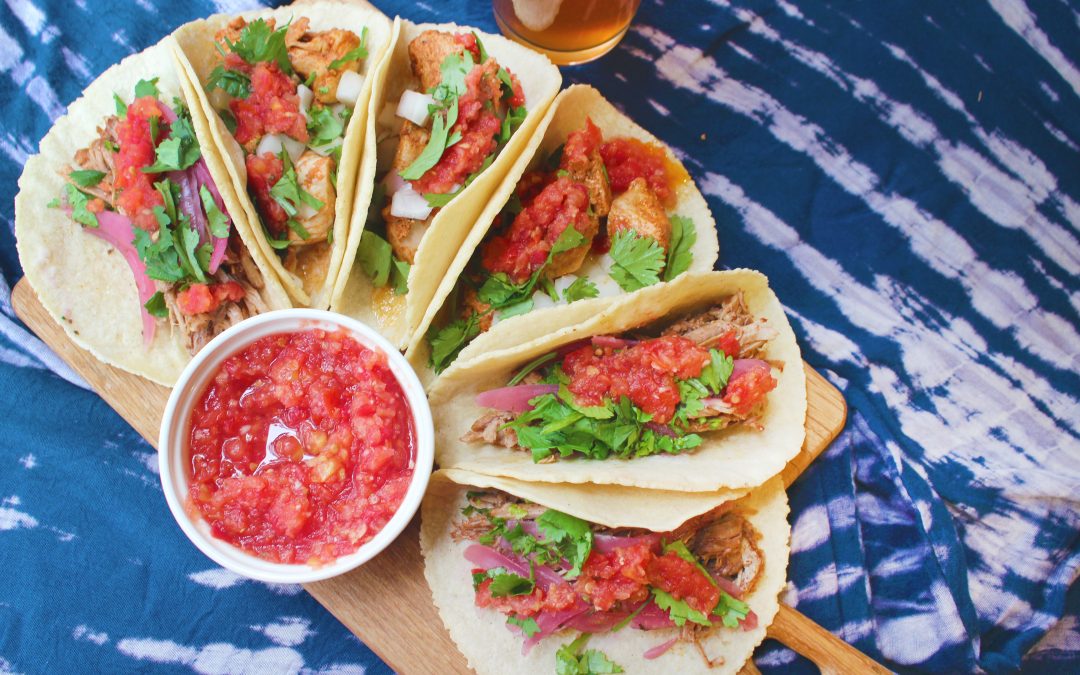 Mexican food in Taipei has come a long way since the turn of the century. For a long time, in Taipei, your only option was to order mediocre nachos or tacos from a Western-style eatery. Today, you’ll discover a plethora of dedicated Mexican restaurants in the capital city of Taiwan.

Mexican food is not just nachos and tacos, though Taipei residents have been stuck with just those choices for a long time. It’s a rich, diverse cuisine with many regional variations. Below we go through some of the most popular Mexican dishes and what makes them so popular with everyone.

You can find a variety of these dishes in any restaurant, in every corner of the world. They are made in different ways-some are cooked with vegetables, others have spicy pepper sauces, while some use meat like beef or chicken. There’s no end to the amazing flavors that await you on your next trip to Mexico or your local Mexican restaurant, like Eddy’s Cantina, the best Mexican food in Taipei. Good Mexican food is not that far away.

Mexican food has a rich, diverse cuisine with many regional variations. Various dishes come from different places in Mexico and have their own flavors, colors, and cooking methods. This flexibility is something that keeps the cuisine alive-and because of the popularity of Mexican food throughout the world, it doesn’t look like it’s going anywhere anytime soon! Good Mexican food is not hard to come by in all corners of the planet.

Mexican food itself is said to date back to Mayan and Aztec culture and has remained popular ever since. The Mayan and Aztec cuisine is largely based on corn, beans, fruits, wild game, fish, and chilies The Spanish brought to Mexico other livestock like sheep, pig, and cows along with dairy, garlic, and other spices. From this period Mexico has also been exposed to cuisines from West Africa, Carribeans, Portugal, and France. There are many different types of Mexican food with each one coming from a certain region such as the Yucatán Peninsula, the Pacific Coast, etc.

The variety of ingredients in Mexican dishes allow them to be modified for dietary restrictions such as vegetarianism or veganism which makes them accessible for those who have those diets or those hosting those guests. Both options can feel like an authentic experience and taste great!

When you say Mexican food, most people think of a nation’s cuisine from various parts of the country. Authentic Mexican food, though, you are talking about food that uses only Mexican ingredients.

In contrast, Tex-Mex is a form of Mexican food based on a smaller number of core ingredients and some of those ingredients are scarce in Mexico like beef, black beans, cumin, wheat flour, cheddar cheese etc.

Tex-Mex is arguably one of the most famous types of Mexican food outside of Mexico given its popularity in the United States. And that leads to some proclamations that Tex Mex is not really “Mexican”.

At Eddy’s Cantina, we aim to provide an authentic Mexican dining experience that includes many Tex Mex dishes. 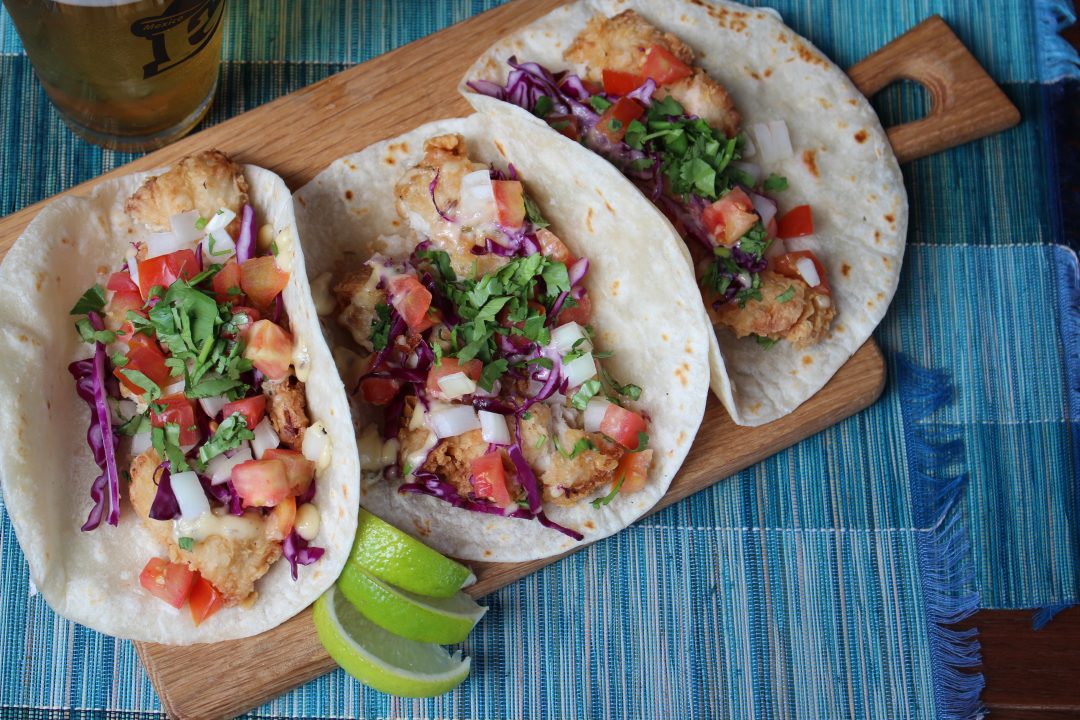 Tacos are one of the most popular dishes in Mexican cuisine. They are made with corn tortillas that are folded over filling, typically meat, seafood or vegetables. Some people like to top their tacos off with onions, cilantro, and spices for an even more authentic flavor!

The varieties of tacos are almost endless but generally categorized by how the tortilla is prepared. Soft tacos use uncooked corn tortillas, hard shell taco’s tortillas are first deep-fried taquitos where the tortilla is rolled up.

Easy to eat with just your hands this is quite possibly the dish that popularized Mexican food around the world. 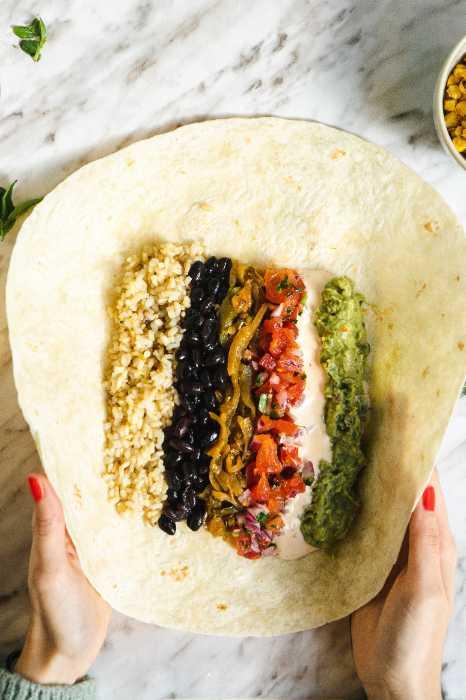 This famous dish consists of a large, soft flour tortilla wrapped around the ingredients. This can be filled with whatever you like-Mexican-style rice or beans, vegetables, meat (chicken, beef, pork), cheese (cheddar is popular), guacamole, pico de gallo, sour cream and spices. 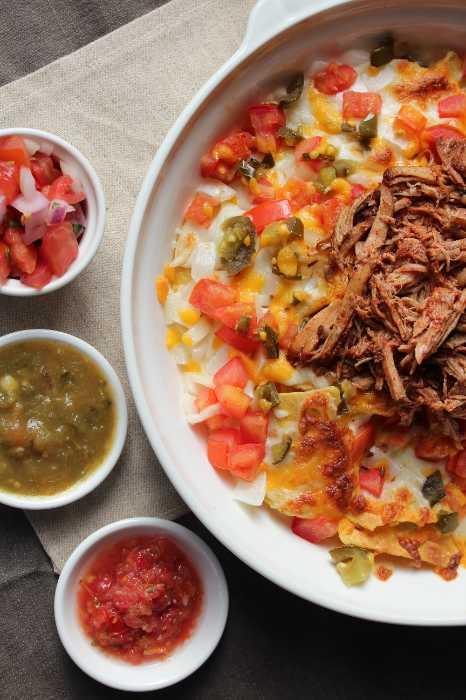 The story of the provenance of nachos is quite similar to chop suey, the popular Chinese-American dish popular with Americans, bt never eaten by any self-respecting Chinese. But nachos are damn good.

There are a couple versions of the story after that but ultimately Anaya at that time had a stroke of inspiration and made the first ever nachos; at that time just deep friend cut up corn tortilla, melted cheese with slices of jalapeno peppers.

The blending of a crispy texture of the tortilla chip drowning in robust flavor of melted cheese while being hit with the sweet zing of the jalapeño has proven to be a powerful combination and caused its popularity to spread to almost all corners of the earth. Originally just 3 ingredients, modern version of it includes meat, tomatoes, guacamole, chopped onions, refried beans, salsa, and sour cream. 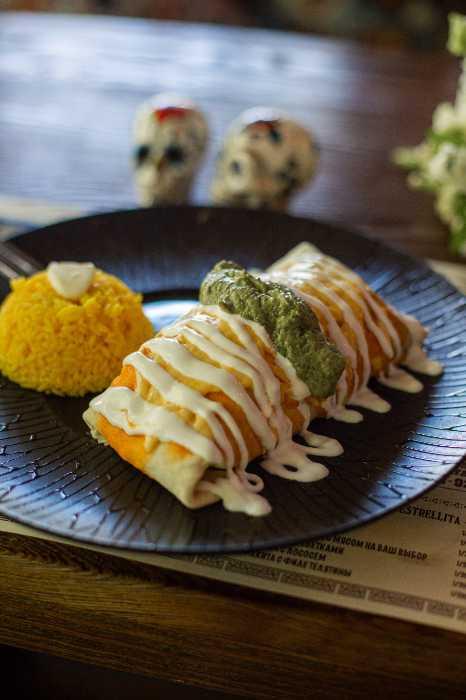 A chimichanga is a burrito, but deepdeep-frieda crispy golden brown. Most stories have it originating in Arizona but some versions have it that Mexican immigrants brought it over to Arizona.

One version of the story is an Arizona restauranteur acciwho dentally dropped a burrito in the deep fryer and was about to use a Spanish curse word that starts with “chi-” but instead used “chimichanga” which means “thinthingamajig Spanish.

If you love burritos, you’ll love chimichangas with its theirspy texture with everything you love about the burrito. 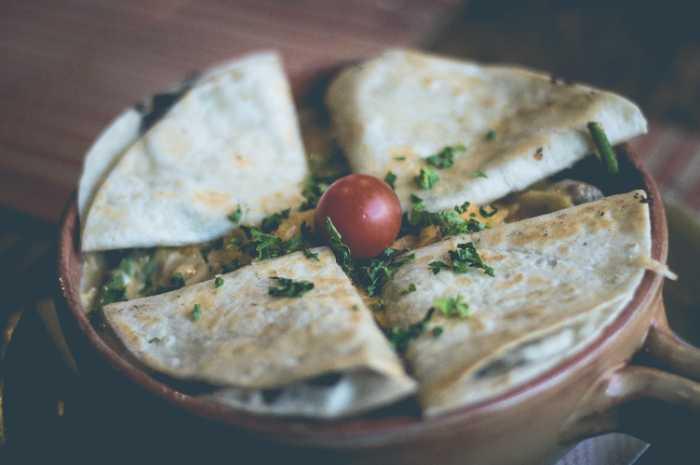 This is a traditional Mexican dish made of a tortilla filled with cheese which melts into a gooey goodness that can be stuffed with meat, vegetables, or any other variety of ingredients. Some people also like to top off their quesadillas with sour cream, guacamole, salsa, etc. The term fajita comes from the Spanish word “faja” or “bond,” meaning belt, which is a reference to the cut of meat used in this dish.

Fajitas today are most typically made with skirt steak but chicken and shrimp are also popular options. In Texas, where you find a lot of these Mexican fusion restaurants, the dish is typically served on a sizzling platter with onions and bell peppers. The fajita can be eaten in tortillas or on its own. 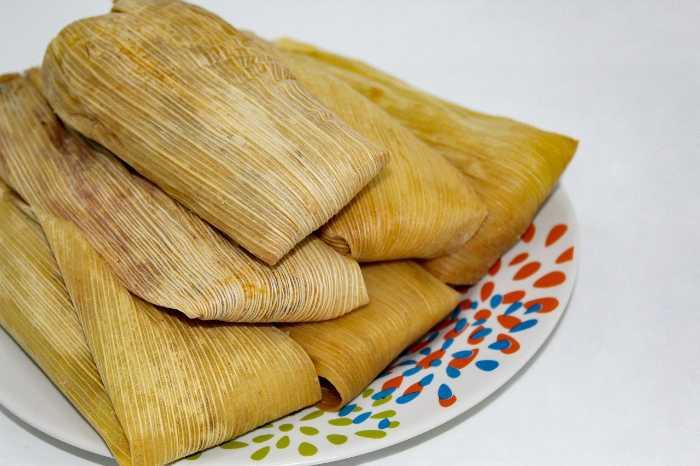 A tamale is a dish made from masa harina, a type of dough made from ground corn. The dough is formed into a corn husk or plantain leaf and filled with meat, cheese, or vegetables.

This is much like the Chinese 肉粽. Eddy’s Cantina serves up tamales on special occasions. 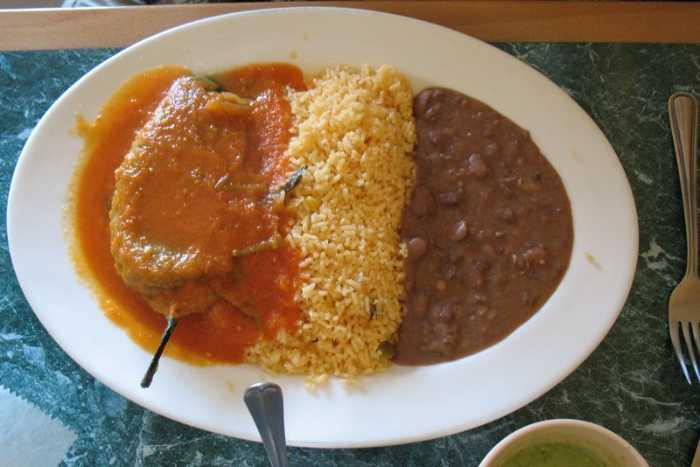 This traditional Mexican dish consists of poblano peppers stuffed with cheese and dipped in a light batter and deep fried.

Huevos Rancheros or “ranch-style eggs” are a traditional Mexican dish made up of tortillas, fried eggs, and salsa. This is typically accompanied with refried beans and/or rice.

Menudo is a traditional Mexican dish that consists of large pieces of beef stomach or other offal cooked in broth with many different spices and served in smaller chunks.

This is also accompanied by lime wedges, sliced radishes, onion, cilantro, and oregano and tortilla. This is a traditional Mexican remedy if you’ve had a few too many tequilas or margaritas the night before.

Mole is a traditional Mexican dish that consists of chicken or beef with many different spices, nuts, seeds, and chocolate. Often referred to as “Mexican curry”.

This can also be accompanied by rice or corn tortillas.

Agua frescas are a delicious, healthy beverage that can be consumed either warm or cold. Agua fresca is typically made of blended fruit and water. Fruit flavors include strawberry, cantaloupe, pineapple, and mango. 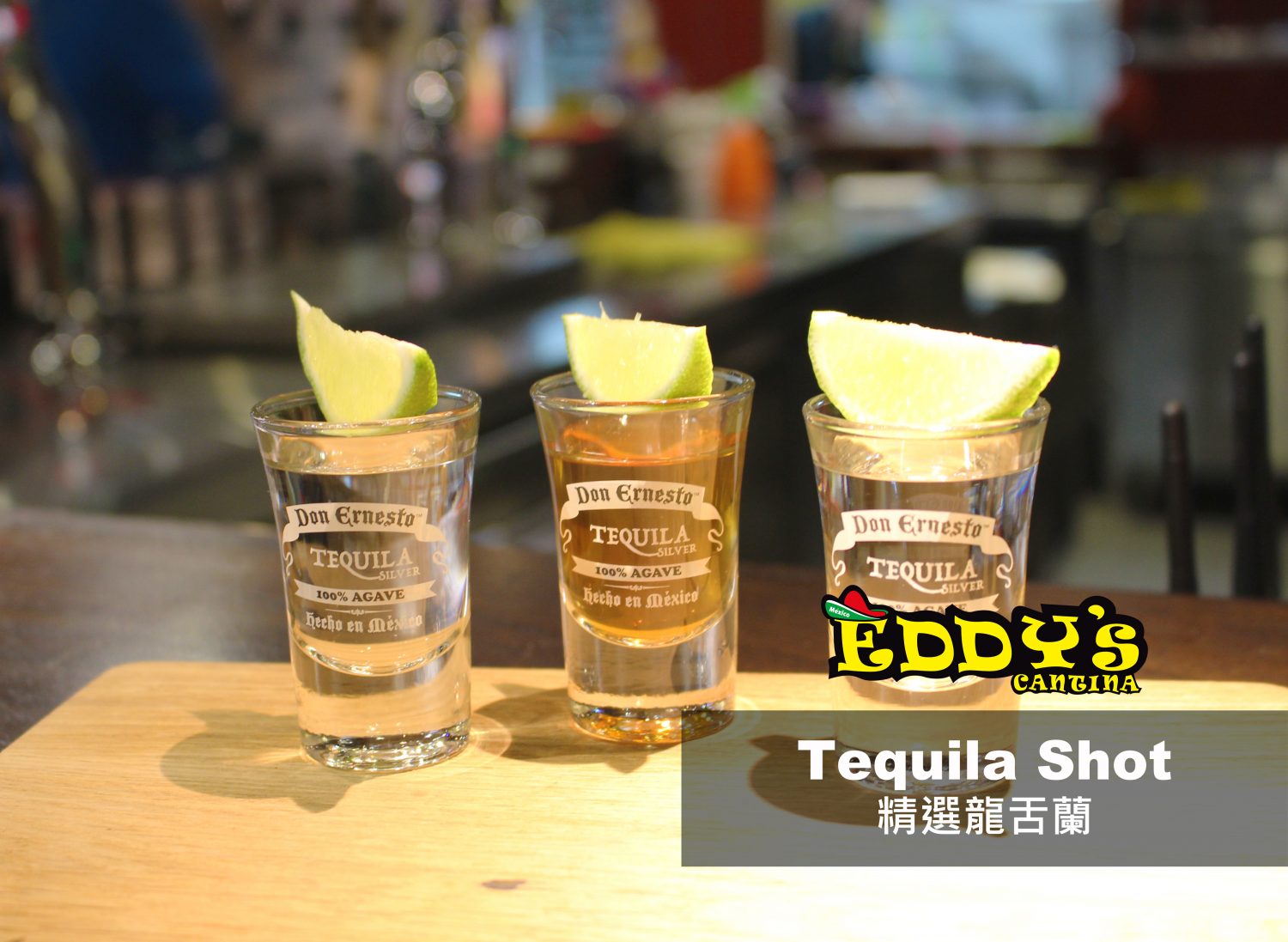 Tequila is a drink made from fermenting and distilling blue agave plants. Tequila typically ranges between 38-55% alcohol content.

In Mexico, tequila is typically consumed as shots or with mixers. Common mixers include orange juice, grapefruit juice, pineapple juice, lemonade, and coke.

Different types of tequila are aged for different amounts of time. Blanco are unaged, Reposao tequila is aged anywhere between 2-11 months while Anejo Tequila is aged for over a year to three years and Extra Anejo is aged over 3 years.

Mezcal is any liquor made from any of the more than 30 varieties of mezcal plant.

All tequilas are mezcal but not all mezcal is tequila, or in other words, tequila is a TYPE of mezcal much like bourbon and scotch are types of whisky.

As stated above mezcal uses any type of agave plants while tequila only uses blue agave.

Mexican beer is not only refreshing but typically lower in alcohol content than other countries’ beers. The most popular brands are Corona, Pacifico, Modelo Especial, Sol, and Tecate.

Most of the beers come in different tints of golden brown color, have no more than 5% alcohol content, are lighter and crisper on the palate, and do not feature a strong aftertaste.

Meaning “sauce” in Spanish, it is the variety of sauces used in Mexican cuisine.

Chips and salsa, which uses deep fried corn tortilla and a tomato-based salsa is an ubiquitos dish in Mexican-American cuisine.

Also known as salsa fresca, or fresh salsa, is a type of salsa, and as the name suggest, which uses chopped up fresh ingredients. It is much drier than other salsas it looked much like a chopped up salad.

Because it is drier than other salsas, it can be used on dishes like tacos, burritos and fajitas as it does not cause the tortilla to weaken and break apart.

A popular condiment that is made of avocado, chili pepper, tomato, onion, lemon or lime juice (or vinegar), salt and coriander (cilantro) served as a dip or condiment on Mexican dishes.

Mexican rice is a Mexican side dish made up of white rice, onion, garlic, tomatoes and spices that is typically served with beans or other dishes.

There is a lot of variation within these regions as each region has it own unique ingredients that go into their dishes.

Mexican cuisine has become popular in recent years because of its diverse flavors, low-calorie content, and healthy fats. Whether you’re looking for tacos or burritos to take on your next camping trip or a new recipe to try with dinner tonight, we’ve got some great dishes that will satisfy any craving. Eddy’s Cantina are experts when it comes to Mexican cooking; if there’s anything else you need help with (or want more information about), let us know!

Mexican food has come a long way in Taiwan in the last two decades and good Mexican food can now be easily found all around Taiwan including Taipei. We hope this guide to Mexican cuisine helps in your discovery of the finest Central American cuisine.